When I get the urge to set sail, it is Arisaig and the famous and magical hues of greens and blue waters that I yearn for. The combination of islands, sheltered bays, overhanging cliffs and surrounding wildlife automatically make me feel closer to the beautiful nature of Scotland and brings an immediate feeling of relief, relaxation and tranquillity.

Sailing out past the majestic beauty of Mull towards the “safe place” of Arisaig where the Hollywood blockbuster “Local Hero” was filmed, we pass what feel like long forgotten coves, beguiling bays and castles, hidden islands and sandy beaches. Sea birds soar above your head and dolphins and seals vie for your attention.

We visit tranquil villages where your welcome is eternal and make our way to Loch Nevis with its glass clear reflections on mirrored lochs give you time to relax and marvel at the magnificence of the West Coast.

Returning to Oban, we pass Eigg and Muck before sailing past the wild retreat of Coll with maybe a sight of the Basking Sharks that inhabit these waters.

Sailing around Mull leads us past the gorgeous Isle of Iona – our very own Holy Isle before passing the uninhabited Garvellachs or Rough Islands which look to be cut from jewelled glass and decorated with precious gems of wild flowers.

Relaxation in five-star luxury has never been this magical.

Our gateway to the highlands and islands ……. Historically a fishing and trading village until the Victorian steamers started arriving in larger numbers to this pretty village, Oban grew into a town as it became a main stopping off point for the Western Isles.

Set in a natural bay, it is largely protected from wilder weather and has some beautiful seaside shops to visit. At the top of the hill behind the bay sits McCaig’s Tower or the Folly as it is better known. Built in 1902, McCaig built the colosseum style structure as a lasting testament to his family and also to provide work for the local tradesmen. Despite it being a steep walk to the top, the views are spectacular. Oban also boasts a cathedral, castle and a golf course and has a rich culture in traditional Scottish music and this is evident with its many festivals. The fresh seafood is a must; it is literally from sea to plate!

The brightly coloured houses in the distance are immediately recognised by eager pre-schoolers as the quaint village of the BBC programme Balamory. If looking for PC Plum and Suzie Sweet is not your thing, then Tobermory still has a plethora of delights to offer. A picture perfect setting of coloured buildings down to the pier surrounded by wooded hills around the bay up to the lighthouse with its playful otters among the rocks. At the bottom of the bay is thought to remain the wreck of a Spanish galleon which fled the English fleet when she anchored in Tobermory to take on provisions. Following a dispute over payment the ship caught fire which caused the gunpowder to explode. She was supposed to have been carrying millions of gold coins when she went to the bottom but no-one has ever managed to find any significant treasure. Tobermory also has its very own chocolate factory.

The most westerly village in Mainland Great Britain it was only accessible by sea until the 1900’s. Today it only has a single track road giving access to it and there is only a population of around 150 people. It is also home to the exquisitely refurbished Mingary Castle built back in 1200AD. Situated on a naturally occurring outcrop of rock on the shore of the bay, it is the perfect place to stop and have lunch or dinner. The castle has had an eventful history and was used by James IV to help him suppress the Lords of the Isles in the 15th century.

Nearby is the stunning beauty of Sanna Bay – ask any Scot and it will be listed as one of their all-time favourite places to visit. The variety of coastal scenery, impressive dunes and seas that range from deep sapphire blues to light jewel like shades of turquoise make this one of the most beautiful beaches and areas we will visit.

Another of the remote villages along the West coast, Glenuig only had access by public road from the 1960s – prior to this access was by boat or by horseback. Electricity was only installed in the 80’s. This has never stopped people travelling here though and surrounding villagers and tourists would often visit to hear the world famous pipers – Angus, Allan and Iain MacDonald.

With rocky shorelines interspersed with pure white beaches, the waters of Glenuig are dazzling – deep hues of blues and tints of pale aqua that reflect the rich green grassland above.

The stunning village of Arisaig in Lochaber is one of the finest the highlands has to offer. The word Arisaig means “the safe place” in the Scottish Gaelic language. Famous for its silver sands of Morar, where parts of the movie Local Hero was filmed, other films using this beautiful location include “Breaking the Waves”, and scenes from the TV series “Hamish MacBeth” and “Monarch of the Glen”.

Arisaig has been one of our most visited locations when our children where young. Parts of the Harry Potter were filmed there with its famous tree islands viewed from the Jacobean steam train.

History has played its part here too as in 1746 Bonnie Prince Charlie left Scotland for France from a place near the village following the failure of the Jacobite rising of 1745. In 1801 “The Highland Clearances” came and tragically over 1000 crofters were cleared off the land and shipped to Nova Scotia to make way for sheep. And in 1853, a local man called John Silver, went to work on the construction of the lighthouse at Barrahead. The lighthouse designer was Thomas Stevenson, the father of Robert Louis Stevenson. Silver met Robert Louis on a few occasions and local legend has it that Robert Louis Stevenson took the name of John Silver for his famous character in Treasure Island.

Steeped in history, this village has a collection of amazing beaches set in a coast of large grassy sand dunes, so you’re always going to have an abundance of wildlife. Minke whales, dolphins, porpoises, basking sharks, otters, puffins, shearwaters and much more – including sightings of elusive killer whales, sea and golden eagles.

A working fishing port on the North West coast of Scotland, it is visited often by the famous Jacobite steam train from the Harry Potter movies. Full of character, it remains a tranquil place to visit and is a rather a new town for Scotland at less than 200 years old. Benefiting from its new marina and the local art shops serving local artisans, Mallaig has one of the best wee fish and chip shops and has seen many drive from the central belt for the day and a fish supper!

Just south of the Isle of Skye lies an archipelago of four small islands – Eigg, Canna, Rum and Muck. Made up of a column of lava, Eigg has a bloodthirsty history of clan rivalry that ended in the death of the islands entire population. Rum is a national nature reserve and is one of Britain’s last wildernesses and is home to the Manx Shearwater that glides straight winged along the surface of the surrounding coast. On the smallest island Muck, a dagger and a number of burial cairns have been found which date back to the Bronze Age whilst thanks to the Gulf Stream its waters support a number of rare crabs, small purple sea urchins, and the only British Coral, the “Cup Coral”. Canna is the archetype of Hebridean islands and displays, evidence of the once great volcanic forces which have been at work in the earth’s crust. Wildlife is abundant here both on land and sea.

Just North West of Mull is the Isle of Coll – a wild retreat covered in over 300 different types of wildflower and standing stones as well as an ancient Iron Age as well as underground passage. The coasts are home to sand dunes – reaching heights of 35m in some places. Unique flowers to the island include Bloody Cranesbill and the Pyramidal Orchid and it is quite regularly visited by Basking Sharks as well as the rare migrant the Corncrake. 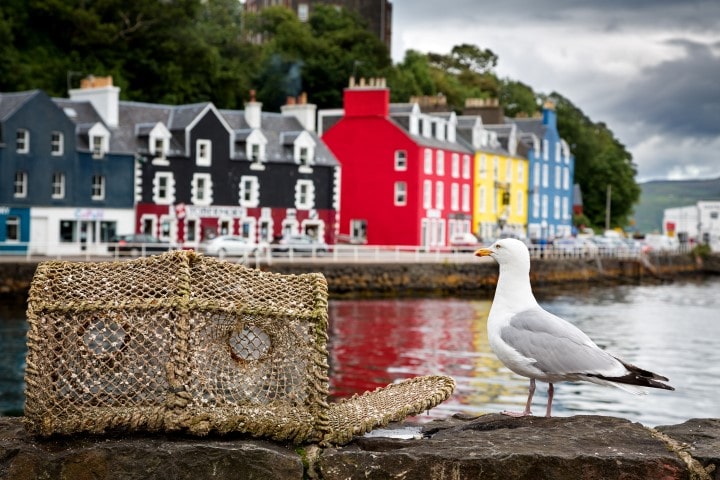 Dear Denice, I am writing to thank you for the wonderful service we received while cruising with The Spirit of Fortitude. Good customer service and a high quality offering is so important when on honeymoon. Their was so much to see and do and the live music was such a treat as we had never heard such a voice as that of young Orla. Our standard of accommodation and the privacy afforded was at such a high level, so much room to move within the cabins and a real sense of space altogether within the ship. When asked would we recommend The Royal Scottish by Alice, we had already posted a recommendation on our facebook! Hope to return again, which i am sure we will. 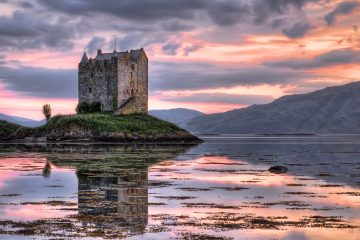 Spirit of Fortitude is one of the
6
Oban or Inverness 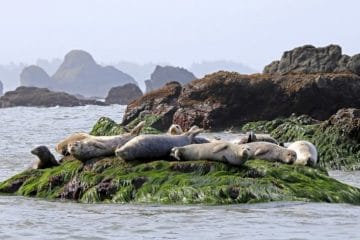 Isle of Skye & The Inner Hebrides

A feast for the eyes and a
6
Oban 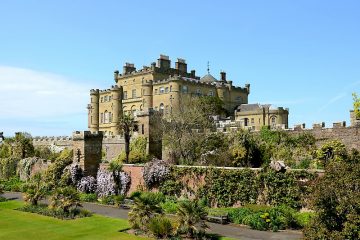